This was originally posted in a private Facebook page for bereaved parents. When I read it to gave me goosebumps and for so many reasons. The most radical reason is this Mom is my kind of woman! What she wrote immediately resonated with everything I (and Crazy Good Grief) are trying to bring to light in the world of child loss. The other thing I love is that it’s raw and real!
Comment below and tell me what you think of this incredible Mom’s story!

I’m freaking tired of grieving…everything about it!! I’m tired of being physically, emotionally and psychologically exhausted!! That’s it; I’m NOT doing it anymore!!

Those words started out as a joke between a grieving sister and myself in a conversation the other night.  We actually laughed about it, saying wouldn’t it be wonderful if it was just that easy. We are both 7 ½ months in after losing our 18 year old sons in car accidents in January. Both of the boys had fallen asleep behind the wheel.  Well, the joking turned into a pretty deep conversation, and for us, an attempt at a new way of approaching life. We call it our Anti-Grief Campaign (AGC). We NEED relief from grieving.
As my grieving sister said, “Grief will no longer have a hold on us! Hostage situation OVER!”
One of my other grieving mom friends laughed and visualized walking with picket signs, STOP THE GRIEF!
My Nathan would say, “Yeah! Fight the system, ma!” He was one to always fight the system.
The fact that we were able to laugh and joke about it was amazingly healing in its own right.
Before you read any further, it is completely understood that many of you are super early in the journey so you are going to think I’m nuts…but one day, you too, will get to a point that you just want the grieving to end. Well, we are TIRED and we’re making a move to end it…or at least change its grip on us.
So, I figured I’d share my PERSONAL thoughts with you…if it resonates with even one grieving parent, awesome! Maybe you’ll decide to try the AGC too…grab a picket sign …we certainly have nothing to lose…loss is why we are here in the first place! [click to tweet!]

I think the only ones dead…or dying… are us. Isn’t that ironic? We are “living” but feel dead…they are “dead” but are more alive than ever, and they prove that every day with the miraculous signs and messages they give.
My Nathan lost both his grandmother and favorite uncle in a matter of months back in 2011…I couldn’t figure out why he didn’t cry. He kept telling me there’s no sense in mourning. I never understood that until Nathan spoke, through a medium, to one of his friends,  (his words) “You people just don’t get it about death; death is a joke”, and he couldn’t stop laughing. I guess he somehow already knew this when his relatives passed.

They are not DEAD as,  we think of dead, they are, “Alive and well and doing just fine.” as Nathan said to a different medium that sought me out (totally out of the blue) to give me that message from my son.

If you are communicating with your kid regularly (and it is like going to a foreign country and not speaking the language so we have to learn how to communicate in a different way to understand each other) letting go of the grief is going to be easier because  you know they ARE here with us… We just miss their physical presence.

In spite of our tragedies, we still can do those things. I think we HAVE to do those things…we can’t finish out our lives in misery and despair…that is not why we were given life. We have all been handed the most difficult experience in the world. How we choose to deal with that experience is up to us. I refuse to deal with it curled up in the fetal position…my son would be so ashamed of me if that was the route I took.

GETTING A GRIP ON GRIEF

POSITIVE thinking and WILLPOWER…quit drinking, quit smoking, quit gambling, quit compulsive shopping, quit over eating, quit grieving…to rid yourself of any demon that has taken over your life it’s the same recipe to success… POSITIVE thinking and WILLPOWER….and humor helps a lot too! I used to be a pretty funny person and I’d like to be that way again….and I will not let grief or guilt get in my way.
Oh yes, I said the other G word, GUILT. Don’t think I don’t know that GRIEF and GUILT go steady.
I know many of you are thinking that you would love to be able to get a grip on your grief, but then you will feel guilty for not grieving long enough? Hard enough? [click to tweet!]
Will I fall off the wagon and have my days of bawling my eyes out? Hell yeah! My life revolved around Nathan for 18 wonderful years, I LOVE him more than life itself and I miss his physical presence more than anything, but all the grieving in the world is NOT going to change things…all it does is make me hurt and miserable both physically and emotionally.
Yes, I’m done… 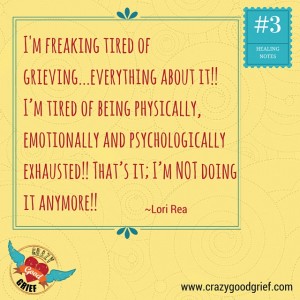 From now on its POSITIVE thinking:

Nothing but great memories and rejoicing in the signs he gives to show me that he continues to stay by my side.
Replace bad thoughts with good…add in some humor… When I was feeling bad about Nathan not being here to start college tomorrow, I bought him a really nice tumbler type cup from the college he was to attend to place down at the cemetery….I said, “At least it was cheaper than his college tuition”…. on the bottom of the cup were signs from him so I know he approved and laughed along with me.

Focusing on what I DID have…18 wonderful years…not what could have been.

No, Nathan won’t ever get married or have children, but you know what else he won’t ever…

He won’t ever be sick, or broke, or hurt, or have to struggle, or pay bills, or …the list is loooong!
My son, Nathan Liam, lived life to the very fullest! In fact, so full it ended up being his demise (fell asleep at the wheel 3 days after his 18th birthday and passed instantly). The very last sentence of the very last essay he wrote for school (he was a senior in high school) was…
“It’s All About the Experience”
This quote became famous all over town after his accident. I even had it engraved on his headstone.

As long as I stay in the grip of grief, I am not living up to my son’s legacy.

Hello Gorgeous Healing Soul!
If you're serious about learning to live a joyful life while grief still exists, put your email below and I'll send you support and inspiration to live in the sunshine! p.s. I am so proud of your courage to heal! *muah*
Your information will *never* be shared or sold to a 3rd party - Pinky Promise!